The BA (Hons) Creative Musicianship degree is a highly flexible and interdisciplinary programme that moulds itself around you and your artistic journey, not the other way around. You’ll dive into a fascinating array of creative areas and build the foundations of your portfolio career in music, allowing you to pursue multiple career paths simultaneously and develop a wide range of transferable skills.

Musically inspired creatives of all kinds are welcome to join our Creative Musicianship programme, including artists, producers, songwriters, and performers who play any instrument. Our team of expert tutor-mentors will empower you to choose your own path, discover and nurture your creative identity, and broaden your horizons in line with your own interests.

No matter your goal as a creative musician, this degree will equip you with all the tools you need to succeed. You’ll learn how to connect technique and music theory, develop and refine your creative process, analyse and reimagine conventional music genres, and write and play live with groups of your peers. Along the way, you’ll gradually create an industry-standard portfolio of your own original music, acquiring all the songwriting, composition, and arrangement chops it takes to make it happen.

Throughout the Creative Musicianship programme, we’ll encourage you to question established ideas and articulate your own decisions and discoveries. Our team also curates an exclusive Creative Musicianship events programme, featuring guest lectures and masterclasses from renowned musicians, artists, and industry insiders, who all actively work on the cutting edge of music.

Music technology also plays a central role in this course, from the inner workings of the recording studio to the lighting and video rigs found in performance venues across the world. You’ll sharpen your skills using the latest gadgets and gear – and as this course moulds itself around you, you’ll be actively encouraged to experiment with every piece of tech you come across. You’ll find innovative ways to turn your visions into reality, both in the studio and onstage.

Across the whole Creative Musicianship degree, you’ll plug into equipment provided by the likes of Apple, Boss, Shure, Korg, Yamaha, Orange, Ableton, Audient and Zildjian. Our Tech Hub will give you access to over 1,000 pieces of gear, all kept up to date and in line with professional industry standards.

Every creative musician is also an entrepreneur – and with this in mind, our select team of successful industry specialists will show you exactly how the music business works. We’ll break down all the key concepts, and explain how they fit together. You’ll cover recorded and live music, publishing, marketing strategies, and everything you need to know about building your own unique and thriving business.

You will be taught at our campus in Kilburn, utilising our live rooms, tech suites and in-house music studio facilities as well as classrooms and lecture rooms. You will have access to use these facilities outside of class time while you are a student at ICMP in order to rehearse and record your music.

You will be taught through a variety of teaching and learning methods including lectures, small group tutorials, performance workshops, music technology workshops tutorials and one to one instrumental tuition. 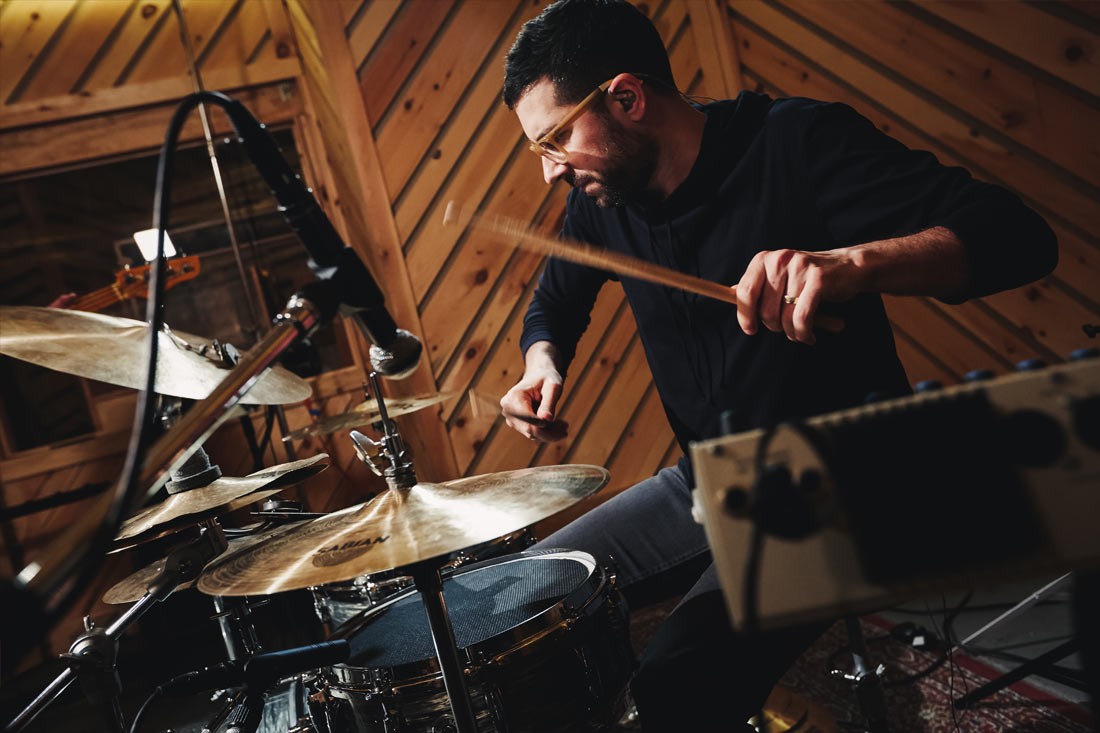 Drumming professionally since the age of 18, Mark Roberts is a highly respected drummer and educator, known for seamlessly merging technical ability with musicality. Mark has over 25 years teaching experience and has taught many of the UK’s current most prominent drummers, placing particular emphasis on technique, individual musicality and personal playing style.

Having worked with the likes of Gruff Rhys, Joss Stone, Huw Warren and Herbie Flowers, Nathan is comfortable working in all contemporary genres and performance situations on bass, drums, keys, guitar and voice. He is an accomplished composer and arranger of both commissioned work and original repertoire. His unique approach to bass playing has earned him endorsements with Cort basses and Ampeg amplification. In 2017, Nathan joined the touring band of the internationally renowned Jamiroquai.

Erika Footman is a highly experienced songwriter and performer. When she is not on the road singing and playing with world famous pop/rock groups, she runs her own record label, working with renowned writing and production teams. Erika has toured the world as backing vocalist to chart-topping British pop sensation, Mika, appearing at numerous international festivals, and performing on TV shows such as Jools Holland, Letterman, and the X-Factor. She has also toured with indie rock group Skunk Anansie, singing guest vocals on their 2012 album Black Traffic, and has appeared as a guest vocalist on the Bastille album Mix Tape.

A musician by trade, Lorenzo De Feo plays guitar, bass, and drums. Lorenzo started work in the music industry as a session musician for pop acts including Mel C, X Factor’s Matt Cardle and Andrea Begley, touring throughout the UK and Europe. Swapping the stage for the studio, he now spends the majority of his time writing, composing, and recording. Lorenzo runs a busy studio in the Hertfordshire countryside where he is the resident producer, working with a range of acts, from solo artists to bands, spanning a broad spectrum of genres.

Audrey Riley is a composer, cellist, arranger, and conductor with close to 200 album credits to her name. For over two decades, she has worked at the very highest levels of the music industry producing an exceedingly diverse body of work, from conducting the orchestra of La Scala in Milan to playing cello with Blur, Nick Cave, and the Foo Fighters. Early recording credits include stints with industrial music legends Test Dept., Paul Weller’s The Style Council, and film soundtrack composer Simon Fisher Turner.

Successful completion of the BA (Hons) Creative Musicianship at ICMP leads to the award of Bachelor of Arts by the University of East London.